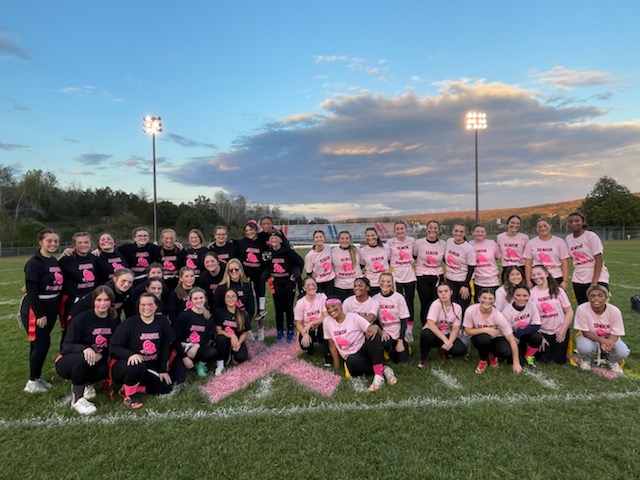 The Junior and Senior Girls take a picture prior to the Powderpuff game.

October is Breast Cancer Awareness Month. The CA Seniors and Juniors wanted to call our Carbondale Family to take action and give hope to those that are suffering. The Powder Puff Game is a Flag Football Game where the Senior class plays the Junior class to raise money and awareness of Breast Cancer. Proceeds are donated to local individuals and organizations to help support the fight against Breast Cancer.

The organization of this event took time and effort from senior and junior volunteers along with several staff members. Mrs. Cobb, Mrs. Naniewicz, and Ms. Calautti were instrumental in organizing the event. Between shirt sales, tattoo, face painting, and hair dye sales plus concessions, 50/50 sales, and door prizes, the event was a huge success. It raised over $2500 for families affected by the disease.

The Powderpuff Game was held at the Andrew J Cerra Sports Complex.  To kick of the game, the National Anthem was sung by senior, Rogemarie Navarrete. The game was a fun experience for all who participated and attended. Many of our football players were the coaches. Fans were treated to a wonderful cheerleading performance by our junior and senior boys as well as excellent commentary by side-line announcers Killian Bannon and Bryan Salitsky and press box announcers Matt Totsky and Brycen Kelly.

The game was a lopsided one, with the seniors winning 32-0, outpacing the heavily favored juniors, who went into the game as 17 point favorites.

The Senior defense opened up with two interceptions of up and coming quarterback Julia Murphy, with Alyssa Cosklo stalling the Junior team’s first drive and Chloe Rumford securing the second pick. Rumford, who also caught a touchdown pass from quarterback Mia Marrero, was excited about her performance. “It was thrilling to get a touchdown considering I know nothing about football. [Julia] Murphy is smart, so for me to catch an interception off her speaks volumes of my skills.”

Defensive coordinator Logan Wormuth was the driving force behind the victory, holding the Juniors scoreless. “I am proud of my defense and how they performed. They executed my every word.”

Marrero, who was the winning quarterback, displayed a calm confidence before and after the game. “My back hurts from carrying the team.” Marrero certainly had a lot of help from her teammates- her sister, Glenda, scored two touchdowns. Ellie Higdon picked up a fumble recovery around midfield and returned it for the touchdown, and Mia Perri nearly scored a touchdown on a 75 yard run.

Perri, although proud of the win, felt she could have been utilized more. “They didn’t feed me the ball enough, but I took advantage of every opportunity I had,” she explained.

The Juniors have a chance next year to try and defeat the Class of 2024. The Junior coaching staff was proud of their players but recognizes their need as a staff to prepare their team better. “As a coach for the Juniors, I feel we should have practiced more and explained more of the plays, both offensively and defensively,” explained Coach Noah Kilmer. “Next year, we will be execute much better and will definitely win the 2023 Powderpuff game against the Class of 2024!”

The Carbondale Area School District would like to thank all who attended and supported our event in support of those affected by breast cancer.