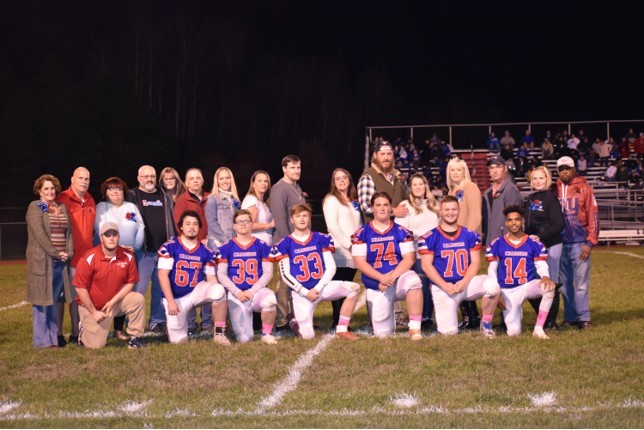 On October 29, 2021, Carbondale Area held its Senior-Parent Recognition Night in honor of graduating seniors for football, marching band/drill team, and cheerleaders. It was the final home game for our seniors against Mid Valley. There were twenty-six seniors recognized.

The senior football players honored were: Captains Liam Misko and Carlos Orta, Daniel Battle, Logan Colonna, Will Durst, Luke Kovaleski, Aaron Lee, Nicholas McCord, Guy Mushow, Jonathon Purvis, Paul Salvatore, Josh Tierney, Logan Wormuth, and Assistant Coach Logan Arthur. “It was a great way to honor the kids that put so much into the sport,” explained Josh Tierney, who was referring to the ceremony. “It meant a lot to all of us.”

“I want to thank the seniors for all their leadership this year,” noted first-year Head Coach Jeff Arthur. “I will miss these guys. I enjoyed being their Coach. These guys should be proud of themselves. As Coach Gabriel always says,  ‘You are successful if you leave the program better then you found it’, and these guys did that. I wish them all the best in their future endeavors. I hope they realize I’ll always be there for them if I’m ever needed.”

The Marching Band and Drill Team seniors were also honored: Band Representative Keefer Wease,  Band Member/Uniform Manager Cora Wylie, Drill Team Member/Equipment Manager Sarah Parry, and Band Member Patricia Green. “I enjoyed the last six years in the band- it has really felt like another family,” explained Green. “The bus rides with everyone and just the moments in general have felt beyond amazing. Band is a major part of my life, and it is not just about playing all the right notes; for me, it’s about hearing and playing the music with the people I love the most.”

The Carbondale Area School District congratulates all of our senior football players, marching band/drill team members, and cheerleaders and wishes them the best of luck in their future endeavors. #CarbondaleAreaClassof2022